There’s nothing quite like signing your first student off for a solo flight. If you’re anything like I was, both you and the student are nervous.

The student’s nervous about the flight. You’re not worried about the student – he’s ready to go. It’s the myriad of endorsements that have you concerned. You’re a pilot and CFI, not a lawyer.

The process is confusing for anyone – from a chief instructor down to a first-time CFI. Everything you need to know is described in FAR Part 61, as well as AC 61-65E (Change 1). They can be complex, so I’ll break it down and – hopefully – simplify it a bit.

You can group endorsements into three sections:

In this post, we’ll talk about the first item, basic solo endorsements. We’ll cover the other items in the coming weeks.

One of the most confusing parts of endorsements is figuring out where to put them – sometimes you find them on the student pilot certificate, and other times they’re in the logbook. And sometimes, they’re on both. Awesome.

So your student’s ready for his first solo flight and doesn’t have any endorsements. What do you need to do?

First, you’ll need to provide training on the knowledge items in 61.87 (b). Then, you’ll give the student a pre-solo written test and review all incorrect answers with the student.

AC 61-65E provides an example endorsement for the pre-solo written exam, but the FARs never mention the endorsement. Here’s the AC’s example:

Once you’ve given and logged all of the required training in the student’s logbook, you can endorse the student’s pilot certificate.

On the pilot certificate, you’ll record the date and make and model, then sign and enter your CFI certificate number and expiration date. Once given, this endorsement is good forever. 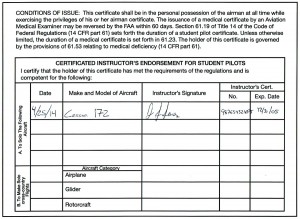 Next, you’ll endorse your student’s logbook. This endorsement should state three things:

This endorsement expires after 90 days, but you or another instructor can keep it current by adding this next endorsement.

If you can’t find it, you’ll need to re-endorse the student pilot certificate. You’ll need to verify that you’ve given all of the required ground and flight training required for the initial solo endorsement – including the pre-solo written exam.

Once you’ve verified the student’s pilot certificate endorsement, you can add this endorsement to their logbook:

The FAA addresses limitations indirectly in the cross-country endorsements section of AC 61-65E, but they don’t cover them in the FARs. So, should you add limitations to the student’s logbook endorsement?

I think it’s a good idea. First, it may help limit some of your liability as an instructor – you probably don’t want your student taking the airplane up solo in 30kt gusting crosswinds. Remember, after your student’s endorsed, they don’t need to ask your permission to fly.

I recommend adding a total wind and crosswind limit to your endorsement. Not only does it define what you feel is safe, it prompts both you and your student to think about their limitations. You could add the limitations to a logbook endorsement like this:

If you need to increase the limits later, you’ll need to re-endorse your student’s logbook.

These endorsements are the first solo endorsements your student will receive – and they’re needed for every solo flight, even cross-countries.